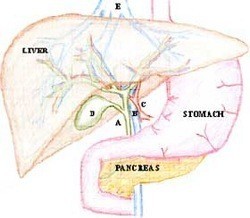 The liver is a large organ in the upper abdomen, just below the diaphragm. It is a major source of proteins for the body and processes much of the food we eat. It also secretes bile via the bile ducts into the gut. The gallbladder (D) stores bile. It is connected to the main bile duct (A) and hangs off the liver.

The liver receives blood from two sources; the portal vein (B) and the hepatic artery (C). Blood leaves the liver through hepatic veins (E) into the vena cava just below the diaphragm. The liver is divided into eight anatomical segments by the branches of its veins. This anatomy provides the basis for most resections of the liver.

The liver is able to regenerate its substance. This means that when part of the liver is removed, the volume of the remaining liver increases until it is close to the volume of the original whole liver. Bile ducts and blood vessels do not re-grow. In general up to 70% of a healthy liver can be removed, however, when there is chronic liver disease present, much less can be removed safely.

Why would the liver need resection?

The most common reason for liver resection is potentially curable cancer. The most common of these, in this country, is spread (secondaries) from a bowel cancer when there is no spread to other organs. The next most common is for hepatocellular carcinoma (Hepatoma, HCC). This is a cancer that originates in liver cells (primary), and is usually associated with chronic liver disease.

It is unusual to resect other cancers, although it is sometimes performed for cholangiocarcinoma (cancer of the bile duct), gallbladder cancer, and for secondaries from; neuroendocrine tumours (like carcinoid), renal cancer, melanoma, and rarely other cancers.

There are a number of benign lesions that can occur in the liver, most don’t cause any symptoms or problems and can be safely watched or left alone, however it is occasionally necessary to resect certain benign lesions including adenoma, cholangiohepatitis, and giant haemangiomas.

Sometimes it is not possible to be sure of a diagnosis before surgery even with modern imaging techniques. Biopsy of the liver is not routinely recommended because it has the potential to cause bleeding and spread cancers. Therefore, occasionally someone may have a resection for what turns out to be a benign condition because the suspicion for curable cancer was high.

What tests are done?

This very much depends on the history and examination. At a minimum, patients undergoing liver resection will have a CT scan (or sometimes MRI), and blood tests. If the tumour is thought to be a secondary from bowel cancer then a PET scan will be performed to rule out spread to other organs.

Other tests will frequently be required to rule out other tumours and assess resectability.

How is the Liver Resected?

There are two broad methods

With both methods, the principals are the same: The liver is mobilized. The vessels to the portion being resected are frequently tied. The parenchyma (meat) of the liver is then cut through using a variety of techniques. Care is taken to seal off the blood vessels and bile ducts that course through the liver. A normal rim of liver tissue is removed around the tumour to ensure ‘clear margins’.

What are the Potential Complications?

The risk of different complications varies between patients. In general the larger the resection the higher risk. The risks are also higher if the patient is older, has significant other illnesses, or has chronic liver disease. Most patients have a fairly straightforward course, but some will have serious complications.

Potential complications of liver surgery include (but not limited to);

Will I need chemotherapy afterwards?

That will determined by a medical oncologist (cancer specialist). Chemotherapy is usually recommended for those with bowel secondaries, and much less for other types of cancer of the liver. Those who have hepatocellular cancer are frequently suitable for an injection of radioactive lipiodol (this helps to prevent further cancer development).

Will I be able to eat normally afterwards?

Yes, once the liver has regenerated there are no dietary restrictions.

What are the chances of cure?

This depends on a number of factors and can often only be truly estimated after the resection and pathology examination of the tumour.

Will I need further check ups into the future?

Yes, it is generally advisable to have regular blood tests and scans for at least five years after a resection so that, if tumour is to recur, it can be diagnosed early.

You will need the Adobe Reader to view and print these documents.